We can now finally reveal the running order Stockholm Slaughter: Akt III. As previously announced, we will not have any overlaps. In practice it also means that we strongly recommend to those that wish to see entire sets of bands that are to perform at Slaktkyrkan, to be there in time in order to avoid long waiting lines at the entry. We will send an email with all practical info a few days prior the festival as well as share the most important info here, please have patience.

Some of you might notice that Morgana Lefay is not on the poster any more. Earlier this week we have been informed by the band that they have (once again) decided to take a break so for now it is unsure when or if they will ever perform again.

This having said we’ve managed to get a replacement in the form of the Stockholm based Death Metal act DIABOLICAL.

Less than 200 tickets available for Saturday so do not wait if you want to make sure you can get in!

Comments Off on New update of the Stockholm Slaughter line-up
November 1, 2018

Mgła does not need much of a introduction. The polish fog will engulf Stockholm with an exclusive performance at the third edition of our festival!

The updated line-up in alphabetic order: 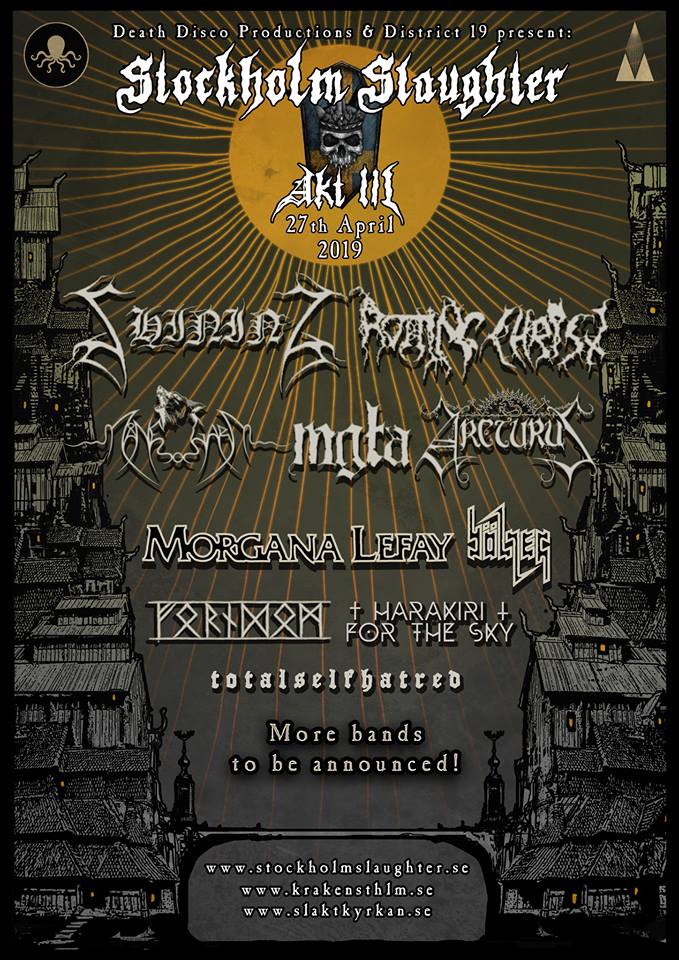 The time has now come to announce the continuation of Stockholm Slaughter: the third act will take place on April 27, 2019. We’ve selected a location that’s become somewhat of a gathering point for the Stockholm metal underground in recent years, having now hosted hundreds of such events: Watain’s release party, the Black Harvest festival, the Dark Days of Stockholm festival and Mayhem’s rendition of their legendary album De Mysteriis Dom Sathanas, for example.

Appropriately, Stockholm Slaughter 2019 will take place in Slakthusområdet, which translates to “the slaughterhouse area”. The entire block used to be one big abattoir apparatus! The main stage will be at Kraken Sthlm, located a few minutes from our previous venue, Fryshuset. The nearest subway and train station is Globen. Located just one hundred meters away or one minute walking distance is our second stage and venue – Slaktkyrkan, or “The Slaughter Church”.

Another important change is that the festival will only take place on Saturday, as opposed to the first two and then three days of our 2018 edition. Expect at least 12 intense hours of internationally acclaimed acts taking turns performing on two stages. Guests travelling from afar are encouraged to arrive one day early, since we’ll be hosting a pre-party event on the Friday, April 26. That said, we’re once again looking forward to welcoming all of you into the heart of Sweden for Stockholm Slaughter: Akt III! 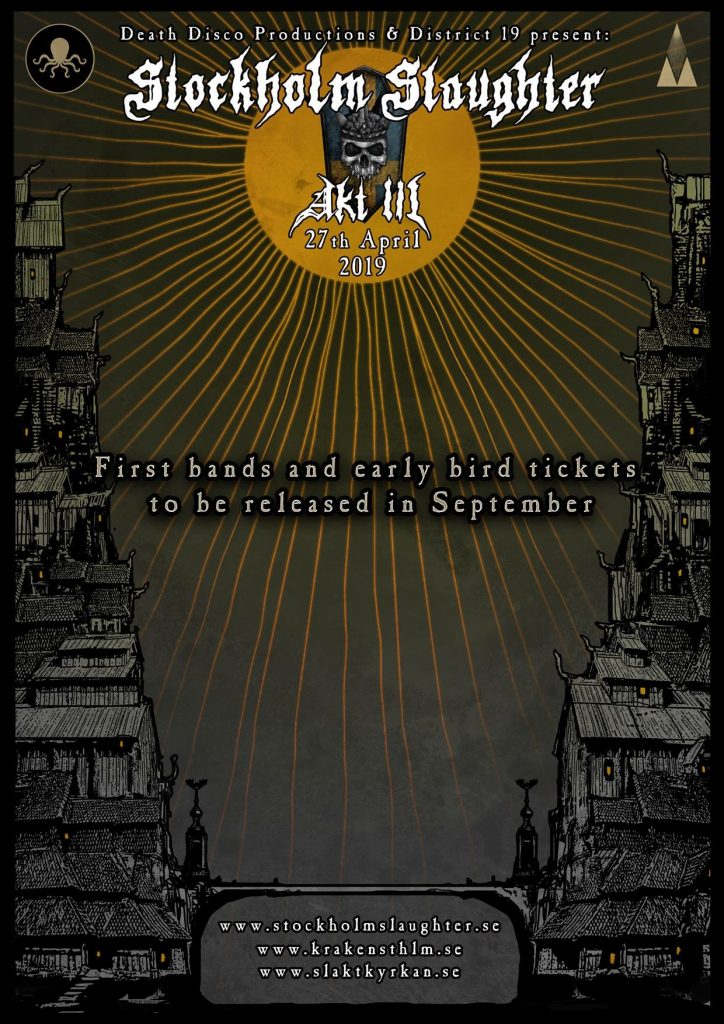 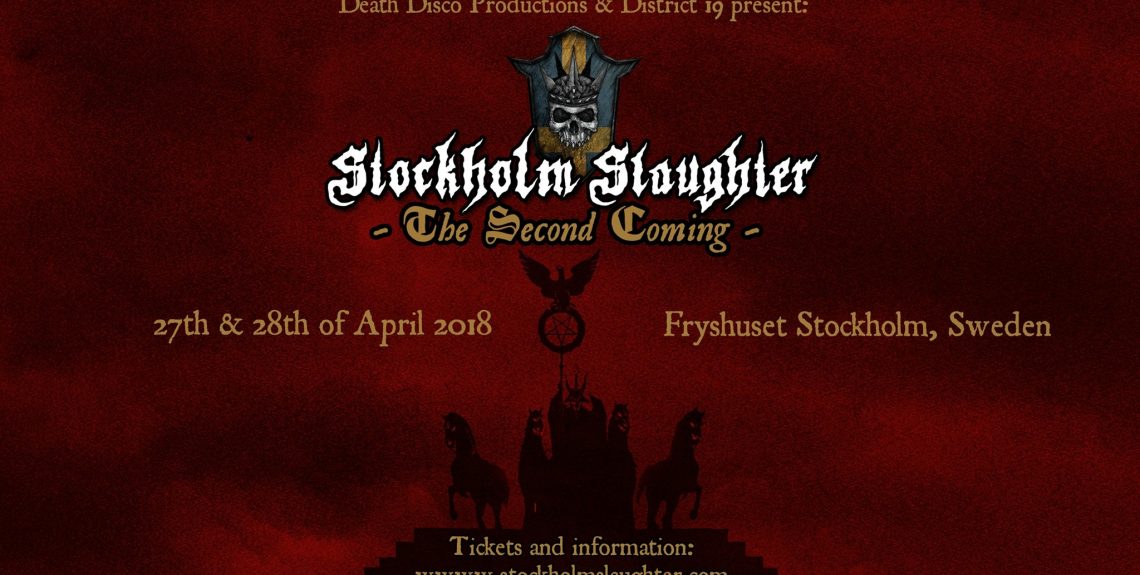 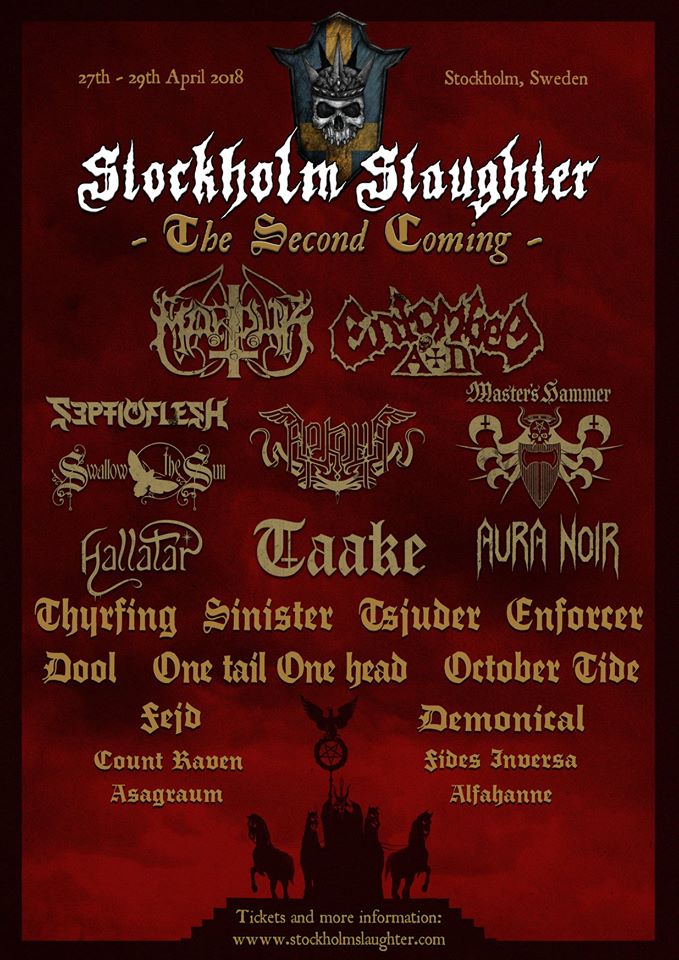 Comments Off on Running order revealed for Stockholm Slaughter!
March 26, 2018

As we promised when we announced the first bands of the line-up, we have tried to work out a solution that has less to no overlapping between the stages and we’d like to think that we’ve reached our goal. In less than 5 weeks time, Stockholm Slaughter – The Second Comingwill once again be the international meeting place for metal fans from all around the world.

Time to start planning for the last weekend of April! 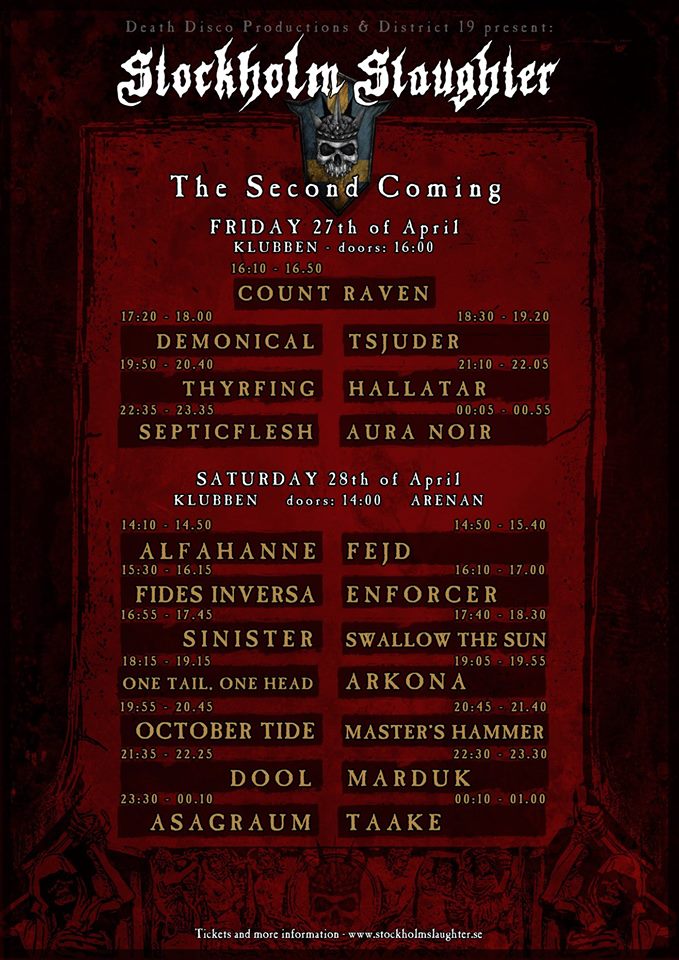 The running order may be subject to change.